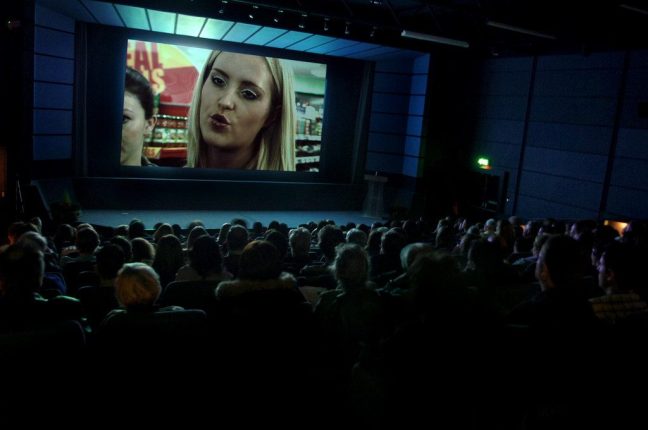 This podcast is of a seminar presented by Dr Karina Aveyard at UNSW Australia for SSSN on 22nd March 2017. Karina’s paper is followed by a question and answer section conducted by the audience present on the day and facilitated by Adam Daniel.

Dr Karina Aveyard is a University of Sydney Postdoctoral Research Fellow in the Department of Media and Communications. She is the author of The Lure of the Big Screen: Cinema in Rural Australia and the United Kingdom (2015), and has published on cinema and film in Media International Australia, Studies in Australasian Cinema, Participations and Continuum. Karina is also co-editor of the collected volumes Watching Films: New Perspectives on Movie-Going, Exhibition and Reception (2013) and New Patterns in Global Television Formats (2016).

This paper focusses on the embodied elements of the film viewing experience across the range of public and private environments in which it now occurs. The proliferation of internet-based technologies has given rise to renewed scholarly interest in the phenomenological aspects of media, and in screens in particular. It is frequently argued that the detailed, larger-than-life image of cinema gives rise to intense and focused mode of viewing. Non-theatrical viewing, in contrast, is regularly assumed to be more distracted and sporadic. While there are clear physical differences between cinema and other modes of consumption, this paper critiques the value-laden underpinnings as the basis for asserting the superiority of the theatrical space. It will seek to refocus this debate through the lens of phenomenology as a more critical (and less taste driven) approach for exploring the different bodily experiences of film viewing and the way in which these shape its modes of engagement and meaning. As a format with perhaps the widest register of screens (from the cinema through to the smart phone), film is uniquely placed to expand the field of phenomenology. It invites us to think about not just how bodies interact with screens, but also how they interact with objects and screening spaces.