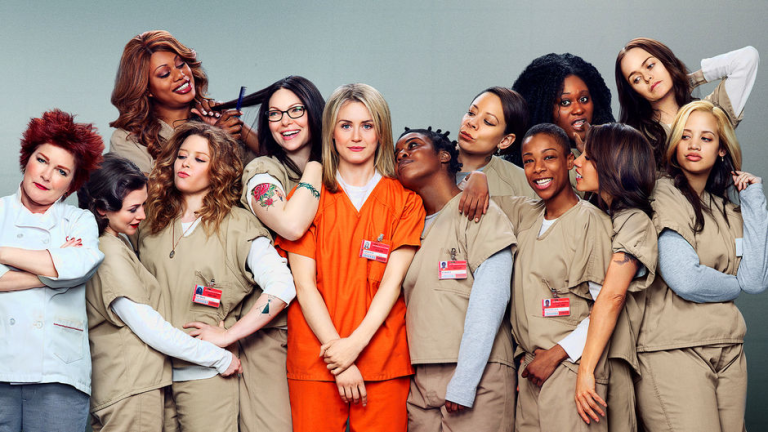 Jessica Ford is a Ph.D. candidate and postgraduate teaching fellow at UNSW in the School of the Arts & Media. Her research interests lie in contemporary American postnetwork television and television histories with a focus on gender and feminism.

[This is the text version of a paper presented on the day. It is a summary of a work in progress and in no way a finished product. Comments and feedback on the ideas in this paper are most welcome and encouraged. Please ‘leave a reply’ in the box at the bottom of this page.]

The show is created by Jenji Kohan, whose previous work includes Weeds, a show about a suburban mother who turns to dealing marijuana after her husband dies suddenly. Weeds ran for seven seasons and Kohan established herself as a provocative and interesting voice in cable television.

Orange is based on Piper Kerman’s memoir of the same name, which tells the story of Kerman’s 13-month prison sentence. The series is loosely based on Kerman’s memoir many of the details have been changed, including characters names, their crimes and the specifics of the prison. It is produced and distributed in the US via streaming service Netflix and is intended for binge-watching. It is the fourth original series to be developed, produced and distributed exclusively for and by Netflix and is the most watched of Netflix’s original series.

In July 2013 streaming service Netflix quietly released all 13 episodes. It did not explode on the television scene, but in the month after its release it slowly gained momentum as critics and viewers began discussing the series favourably. Orange’s reception cycle is more akin to an independent film that slowly makes its way into the mainstream conscience as audiences became aware of it via various sources including word of mouth.

The hour-long dramedy follows Piper Chapman played by Taylor Shilling as she enters Litchfield minimum-security prison on a drug trafficking charge from 10 years earlier. In prison, Piper meets a wide range of women from various ethnic, racial, economic and class backgrounds. The first episode, which we will be watching today, is largely focused on Piper and does not spend much time with the other characters. In many ways Piper is the least interesting character in the series. She is what Kohan calls a ‘trojan horse’ character, meaning that it is very hard to sell a show about a group of racially diverse women in prison unless you have a entry point. You can sell a show about a nice white lady who goes to prison, but the series is really about the cast of characters around her.

In each episode we learn the back story of a different character, in the first season we learn about transgender prison hairdresser Sophia, the eternally optimist Taystee, white drug addicts Nicki and Tricia, young Latina Daya whose mother is also in prison, Miss Claudette – Piper’s bunkmate and a child trafficker. The series has been praised for its diverse ensemble cast, which includes African-American, Latino, lesbian and transgender actors and characters, amongst other ethnic and economic minorities whose stories are rarely given space on American television.

In 2013, the series was given a prestigious Peabody Award, which is awarded by a committee who seek to recognise extraordinary work in the media. The series has also been nominated for a number of GLAAD Awards, Golden Globe Awards and Primetime Emmy Awards.

I addition to the pilot episode I am also going show two clips:

There are several things that I am particularly interested in discussing in relation to Orange is the New Black:

2. How does it change the traditional television reception cycle?
– How does Orange take the notions of liminality and privilege as both industrial and thematic concerns?

3. What is the aesthetic and style of the series?
– How does this relate to the idea of contemporary television as cinematic?
– Does Orange have a stylistic or aesthetic similarities to indie cinema?